Turmeric is a well-known yellow spice that’s often used as a cooking agent. You know, to give it a “kick.” Turmeric powder is often added to soups, vegetables, fish, teas, salads, milk, and the list goes on. If you are a turmeric fan, it’s probably because you know how rich in vitamins and minerals it is, however, the active compounds in turmeric known as curcuminoids is the real star of the show.

In this blog, we are going to look at curcumin, the primary curcuminoid, and focus on 3 life changing benefits associated with curcumin supplementation. If we were to account for all “curcumin” related benefits, this short blog would end being an eBook.

Because, nearly all studies use turmeric extracts containing curcumin as opposed to turmeric powder, it makes healthy sense to use curcumin instead of turmeric. Due to the popularity of turmeric, many curcumin-based products are named TURMERIC so make certain to look at the supplement facts and verify that it contains standardized form of curcumin.

It is widely held that chronic, low-level inflammation plays a major role in nearly every chronic Western disease. So, anything that can help fight chronic inflammation, and help prevent and even treat these diseases, is

welcome. Curcumin possesses strong anti-inflammatory properties capable of reducing chronic inflammation, resulting in the relief of symptoms and in some cases even helping reverse certain conditions.

Depending on the degree of intensity, every exercise session will cause varying degrees of microscopic damage (tearing) to muscle fibers. As a response to the intra-muscular damage, an inflammatory state is experienced resulting in potential extended delays in recovery and muscle soreness. As a proven anti-inflammatory supplement, curcumin is also effective in the management of post exercise-induced inflammation. The result may be faster recovery from exercise and reduced muscle soreness.

A strong word of caution: because curcumin has anti-inflammatory, anticoagulant, and blood-thinning properties, anyone on blood thinners or anticoagulants should consult their health care provider prior to supplementing with both turmeric and/or curcumin.

Arthritis usually deals with inflammation in the joints. So, given the fact that curcumin is a potent anti-inflammatory, it stands to logic that it can help with many types of arthritis, i.e., osteoarthritis and rheumatoid arthritis.

Several studies, document curcumins role as an effective supplement for those suffering with arthritis. In fact, one study reported that 94% of those taking curcumin and 97% of those taking diclofenac reported at least a 50% improvement with the curcumin group experiencing less side effects. So, curcumin supplementation is regarded as a smart choice and should be considered by anyone being affected by arthritis.

A very important benefit associated with curcumin supplementation is its role in improving endothelium (the lining of blood vessels) function. Endothelial dysfunction can affect the ability of the endothelium to regulate blood pressure and blood clotting. Studies have shown that curcumin favorably affects endothelial function. One study shows it works as well as a common statin drug, and another shows it’s as effective as exercise.

It seems like everything goes back to curcumins highly effective anti-inflammatory properties and because inflammation is such a strong component of heart disease, it is easy to understand why curcumin supplementation is popular among those concerned about heart health.

Naturally, anyone taking or planning to take curcumin for its role in heart health should first, discuss it with their health care provider.

How Much  Curcumin Should be Taken Daily to Reduce Inflammation

Most experts agree that the magic number ranges between 500mg and 1 daily gram of curcumin is needed to have the desired anti-inflammatory response. Another calculation model is 1.4mg per pound of body weight. Hence, if you weight 140 pounds, based on this model the daily dose would only be 196mg. The consensus seems to point to the higher dose.

The Smüthe Company offers a product called TURMERIC which uses two branded forms of curcumin: C3 Complex® and C3 Reduct® both ingredients provide the highest concentration of curcumin. What’s special about this formula is the inclusion of BioPerine® a branded form of black pepper that has been clinically shown to increase curcumin absorption by 2000%. 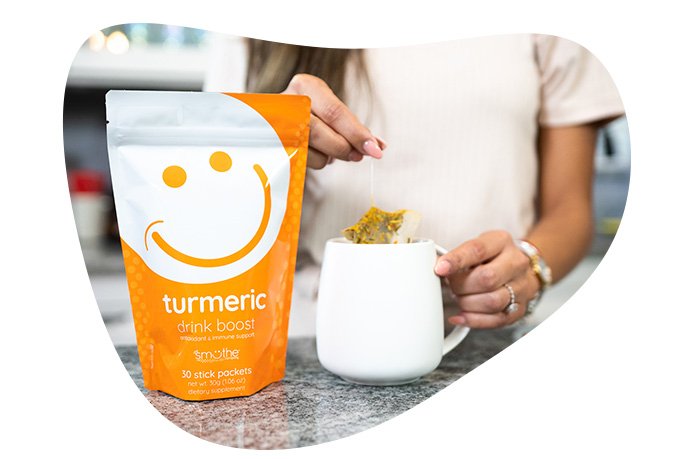 There are many quality curcumin supplements on the market, but none provide the uniqueness of TURMERIC which can be added to anything. This product is unflavored, 100% natural, sugar free, gluten-free, non-GMO, and free of artificial flavors, sweeteners, additives, and preservatives. They come in convenient stick packets that can be taken anywhere and because they are unflavored, can be added to any food or drink.

Hopefully, this article helps you understand that there’s a big difference between turmeric and curcumin and that there’s a specific concentration of curcumin that is desired. Although the number of benefits go far beyond the scope of this blog, you’re now familiar with three of the primary many benefits of curcumin. Lastly, you have a recommendation for where to start your curcumin question.

The statements hereto have not been evaluated by the Food and Drug Administration. These product are not intended to diagnose, treat, cure, or prevent any disease

©2022 The Smüthe Company. All Rights Reserved.

We use cookies on our website to give you the most relevant experience by remembering your preferences and repeat visits. By clicking “Accept All”, you consent to the use of ALL the cookies. However, you may visit "Cookie Settings" to provide a controlled consent.
Cookie SettingsAccept All
Manage consent

This website uses cookies to improve your experience while you navigate through the website. Out of these, the cookies that are categorized as necessary are stored on your browser as they are essential for the working of basic functionalities of the website. We also use third-party cookies that help us analyze and understand how you use this website. These cookies will be stored in your browser only with your consent. You also have the option to opt-out of these cookies. But opting out of some of these cookies may affect your browsing experience.
Necessary Always Enabled
Necessary cookies are absolutely essential for the website to function properly. These cookies ensure basic functionalities and security features of the website, anonymously.
Functional
Functional cookies help to perform certain functionalities like sharing the content of the website on social media platforms, collect feedbacks, and other third-party features.
Performance
Performance cookies are used to understand and analyze the key performance indexes of the website which helps in delivering a better user experience for the visitors.
Analytics
Analytical cookies are used to understand how visitors interact with the website. These cookies help provide information on metrics the number of visitors, bounce rate, traffic source, etc.
Advertisement
Advertisement cookies are used to provide visitors with relevant ads and marketing campaigns. These cookies track visitors across websites and collect information to provide customized ads.
Others
Other uncategorized cookies are those that are being analyzed and have not been classified into a category as yet.
SAVE & ACCEPT

SAVE ON YOUR FIRST ORDER

If you would like to view or modify info you have previously supplied email us at privacy@mysmuthe.com

By submitting this form, you are consenting to receive marketing emails from: Mysmüthe. You can revoke your consent to receive emails at any time by using the unsubscribe link, found at the bottom of every email. Emails are serviced by Campaign Monitor.